Check here for all of the latest news from The Foundation. 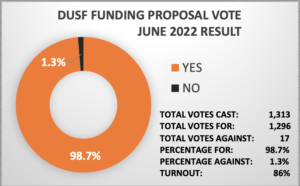 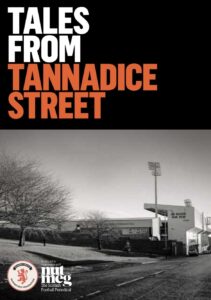 ‘Tales From Tannadice Street’ weaves together a collection of fine writing and illustration dedicated to Dundee United. It makes for an extended love letter to the club, a romance spun around Ivan Golac, Jerry Kerr, Jim McLean and all of the rest. Produced by the Dundee United Supporters’ Foundation in conjunction with Nutmeg magazine, here is a high quality collection of articles by various authors from screenwriter Neil Forsyth to former midfielder Craig Easton that are nostalgic, analytical, comic, thrilling and heartbreaking.

To open these 170 plus pages is to push a turnstile into Tannadice.

You can Pre-order HERE 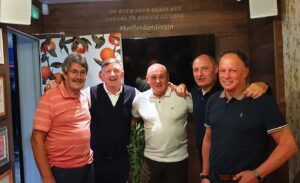 The Foundation, in association with Dundee Rep are delighted to invite you to a Q&A with United Legends: 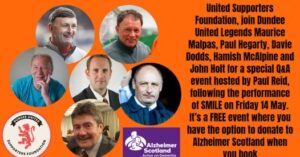 Join Legends Maurice Malpas, Paul Hegarty, Davie Dodds, Hamish McAlpine and John Holt on Friday 14th May at 8:15. This is a free online event brought to you in association with DUSF and Dundee Rep.

You can also make a donation to our chosen charity partner Alzheimer Scotland. The event is open to members and non-members of DUSF. Also, don’t miss your last chance see Smile, the Jim McLean play which is streaming on-line until Sunday 16th May.

We are delighted to announce that due to the support and fantastic backing from our 1,800 plus members, £17,500 will be transferred to Dundee United FC today meaning the target total of £100,000 that we set in January has been met. This has allowed DUSF to contribute much needed additional funds to assist the Club in their recovery from the financial impact caused by the pandemic.

In a recent period where the very soul of football has been under threat from corporate owners in England, Spain and Italy, this financial support that members have given to their Club in a time of crisis for themselves is truly remarkable and quite humbling.  It clearly demonstrates the passion and loyalty we all have for our beloved football club.

Our thanks to each and every one of our members, and we hope the Foundation can continue to grow in numbers and influence as we look towards ensuring a bright future for Dundee United FC.

This is the second tranche of £100,000 that DUSF has provided to the Club in recent months. Given the extraordinary season this has been, members voted overwhelmingly in January that money would be given to the Club to assist directly in COVID-19 recovery.

The first £100,000 transferred in June 2020 assisted the Club’s short-term cashflow, and will be re-assigned to a capital project when normality resumes. The next phase of our partnership will be to work with the Club and our members to identify enduring, sustainable projects that we would put to a future member vote for DUSF financial support. For example, a bricks and mortar facility that would enhance our capability to attract and retain high-quality youth academy prospects.

In addition to these funds transferred over the last 10 months, the Foundation has also raised money to support improved facilities for supporters with disabilities, local charities, and other fan-led projects. In total over £233,000 has been raised since DUSF was launched in June 2017.

We have seen recently with the European Super League proposals what can happen when that trust between fans and the boardroom breaks down. We are convinced that a growing Foundation can not only help the Club financially, but can also have a key role in developing a mutually beneficial Supporter/Board relationship. 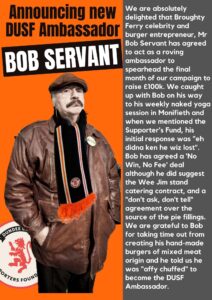 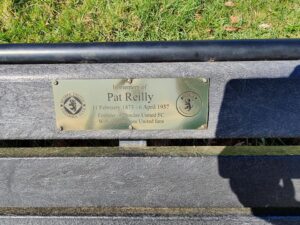 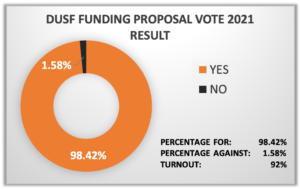 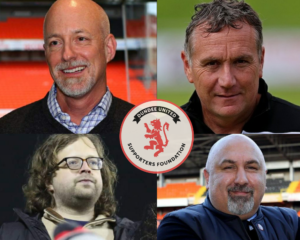 This news further strengthens the partnership between DUSF and our Club.

Mark Ogren said “I was pleased to sign up as a member and would ask all United fans to join me, Scott, Micky and Tony as members if possible.

“During the difficulties presented by the current pandemic, we have enjoyed a strong working relationship with the foundation and as a Club we see that partnership continuing to grow. Joining DUSF is a clear way that our fans can help secure the future continued growth of our football club.”

You can read the full Club statement here

We are delighted to announce that the funding proposal put to our members in a ballot has been approved. There was a turnout of 91% of the voting members with an overwhelming majority of 99% voting Yes. This convincing vote in favour will allow us to progress with the Partnership Agreement and the transfer of £100,000 to the Club as outlined in our proposal to DUSF members.

Become part of the foundation

Please submit your name and email address here to receive news about the Foundation.